The first sawmill on the bank Logmozero was built in twelve miles from the city of Petrozavodsk in 1874.

The grounding date of Solomenskiy sawmill is considered 1874 (March 7, old style). After the abolition of serfdom Russia rapidly begins to develop capitalism. For the construction of factories and plants they need lumber and other building materials.

The tsarist government patronized the new enterprises paying them special bonuses, breeders got all sorts of benefits, there was an order given to the state offices to help every resourceful people, particularly among the nobility and merchant class. Feverish and haste foundation of enterprises, joint-stock companies, etc., which was characteristic of the period of revival of capitalist production and trade, did not miss the Olonez province.

Among the many entrepreneurs seeking permission to operate the state-owned forests of Karelia there was the 1st guild merchant from St.-Petersburg Ilya Fedulovich Gromov.

After meeting of his petition by the Governor of Olonez on May 16, 1873 there began the construction of another timber trading house owned by Gromov and K.
On March 9, 1874 the provincial authorities of Olonez county were notified that Solomensky sawmill building is finished, and that its action started on March, 7.

So in 12 versts from Petrozavodsk, on the left bank of Logmozero lake there was Solomensky timber company "Gromov and K" born.

The frames sawed slowly: one log in about 10-15 minutes. They sawed about 80 logs per shift. In 1876, there have 76 people worked in the factory. In 1900. situation improved greatly -110 people, including 6 women. Solomensky sawmill gave huge profits to its owner. By that time the plant was considered to be one of the leading enterprises of Karelia. Every year there 50-60 thousand logs sawed. Gromov’s ships "Dyuzhij" (“Hefty”) and "Mogutshij" (“Mighty”) laden with a valuable commodity were sent to Finland via the Baltic and White Sea ports.

Soon it happened so that a prosperous merchant started to be pressed up by his resourceful colleagues.

In 1901, the building of Solomenskiy timber owned by A.E. Pimenov was finished, and in 1908 in its place (in the south-west coast Logmozero) there was a three-mast sawmill erected, which was owned by known in northern Russia woodmonger A.P. Belyaev. The first manager of the plant was Vinidikt Nikolaevich Chedaev.
Plants were belonging to different owners, but the working conditions there were equally heavy. Safety measures in factories were not observed. In the pursuit of profit, the workers complaints were ignored, although the factory inspectors of Olonez province did check safety rules, working conditions, the accuracy of calculations for the work of a sawmill workers. Schedule of working hours in factories was heavy.

The first sawmill on the bank Logmozero was built in twelve miles from the city of Petrozavodsk in 1874.

And according to Vladimir Nikitovich Deniskov, who worked at the Gromov’s factory in 1910, it looked like this:
I shift from 4 am to 9.30 am.
II shift from 10 am to 3 pm, then the I shift continues working from 4 pm, then the second once again, and so the whole day long, like a squirrel in a cage.
In 1914 the Gromov’s factory burned down completely. Workers had to go cap in hand to Belyaev, and he applied them for work. Gromov’s disaster wasn’t good for the workers, but it enjoyed Belyaev, because he began to produce nearly twice as many boards.
July 1914, Germany declared war on Russia. The first party of soldiers has been sent to the front from Petrozavodsk. Most enterprises of Olonez province were closed. The timber industry was in a particularly difficult situation, because the export of timber to the external and internal markets stopped soon. In the winter of 1914-1915, some timber merchants have closed their businesses, as well as Solomensky timber, which didn’t work until 1919.

In the conditions of civil war and military intervention the factory equipment was dismantled and prepared for evacuation.

A significant part of workers and youth came to the defense of the Soviet Republic.
After the October Revolution Solomensky timber was part of a Timber joint stock company until its nationalization in 1918. After the Great October Socialist Revolution Solomensky timber becomes the second largest company in Petrozavodsk. At that time the chief accountant of this society was Moses Yakovlevich Marshak – brother of Samuil Marshak - a famous children's writer, who came to Petrozavodsk to his brother.
After the victory and consolidation of Soviet power in Petrozavodsk and Olonez province the workers began returning to the former Belyaev’s plant. The plant reopened in October 1919.

In July 1921 the first steamship from the plant to England was shipped. In the navigation of 1921 there were five ships dispatched - 656.12 standards (one standard is 4.674 cubic meters).

Development of the sawmill in the country during the first five years followed the path of reconstruction and increasing of sawmills capacity. During four years of five-year period in the timber industry there have been over 3 million rubles invested.
TheSolomenskiy sawmill has been reconstructed. In accordance with decision of the Government of Karelia in January 1931 about strengthening of financing of new industrial construction in the republic and the allocation of funds for the conversion of sawmill the Solomenskiy sawmill launched major reconstruction. All sawmill equipment was transferred from the gear drives to the electric

Then there began equipping of the sawmill with more sophisticated woodworking machines.

As a result of the growth of modernization and construction of a woodworking shop the structure of production generated by sawmill has changed. New woodworking shop began producing planed boards for construction and furniture manufacturing.
echnical reconstruction of the sawmill and better raw material cutting technology have allowed increasing significantly the percentage of useful timber output. If in 1929 the average valuable timber output was determined at 56 percent, then in 1932 it rose up to 59 percent.
The peaceful life of the Soviet people was interrupted by the war. The factories were evacuated. Workers and habitants of Solomennoe evacuated together with the equipment. Solomensky timber was evacuated to the city of Luza of the Kirov region.

The main production site is located in Solomennoe.

Market for plant industrial constructions is located in the east coastal area of Onega Lake and partially extends to the northern part of the coastal slope of Logmozero.
Raid on Logmozero has taken 245000 kbm. of sawlogs during navigation. Plank warehouse is the area equal to 2.7 hectares allowing to roll out of 110000 kbm of debarked logs during the winter supply.
Attractive and convenient location allows the timber company to collaborate with many enterprises of foreign countries and the former Soviet Union.
The plant has a convenient contact with all the port cities of European countries and the industrial centers of the Soviet Union By water on Onega and Ladoga lakes and the Volga-Baltic Canal named after V.I. Lenin, and also by rail on the highway Leningrad - Murmansk.

Company supplies its products - lumber to England, France, Germany, furniture - to Karelia and partly in the Murmansk region; pulpchips to PPMs of Kondopoga and Segezha; consumer goods - to the Leningrad Region, Belarus, Ukraine.
Historical events that have shaken the entire country didn’t miss the plant, too. Since 1992, the plant was converted to “PLMK” LLP, and in 1998 PLMK declared bankrupt and its property was transferred to the state.
September 11, 1998 the state property of PLMK has been leased to AB Invest LLC. However, a positive outcome to revive the plant has not happened.
In 2005 the investors from Izhevsk purchase the plant.
Enterprise restored its former name - “SOLOMENSKIY LESOZAVOD" LLC. 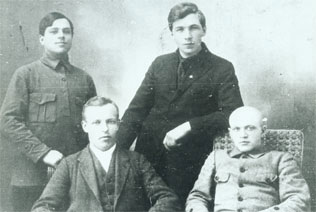 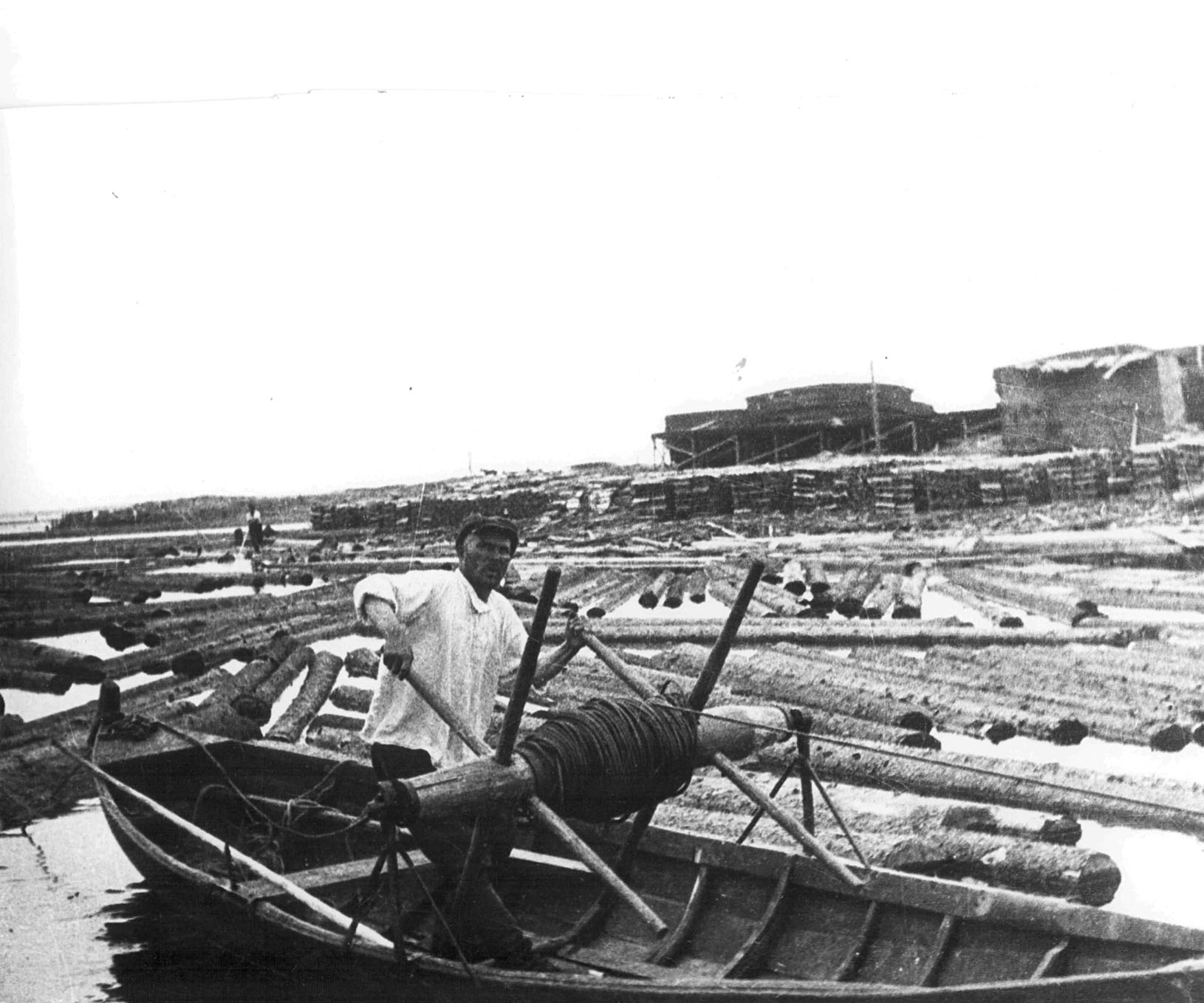 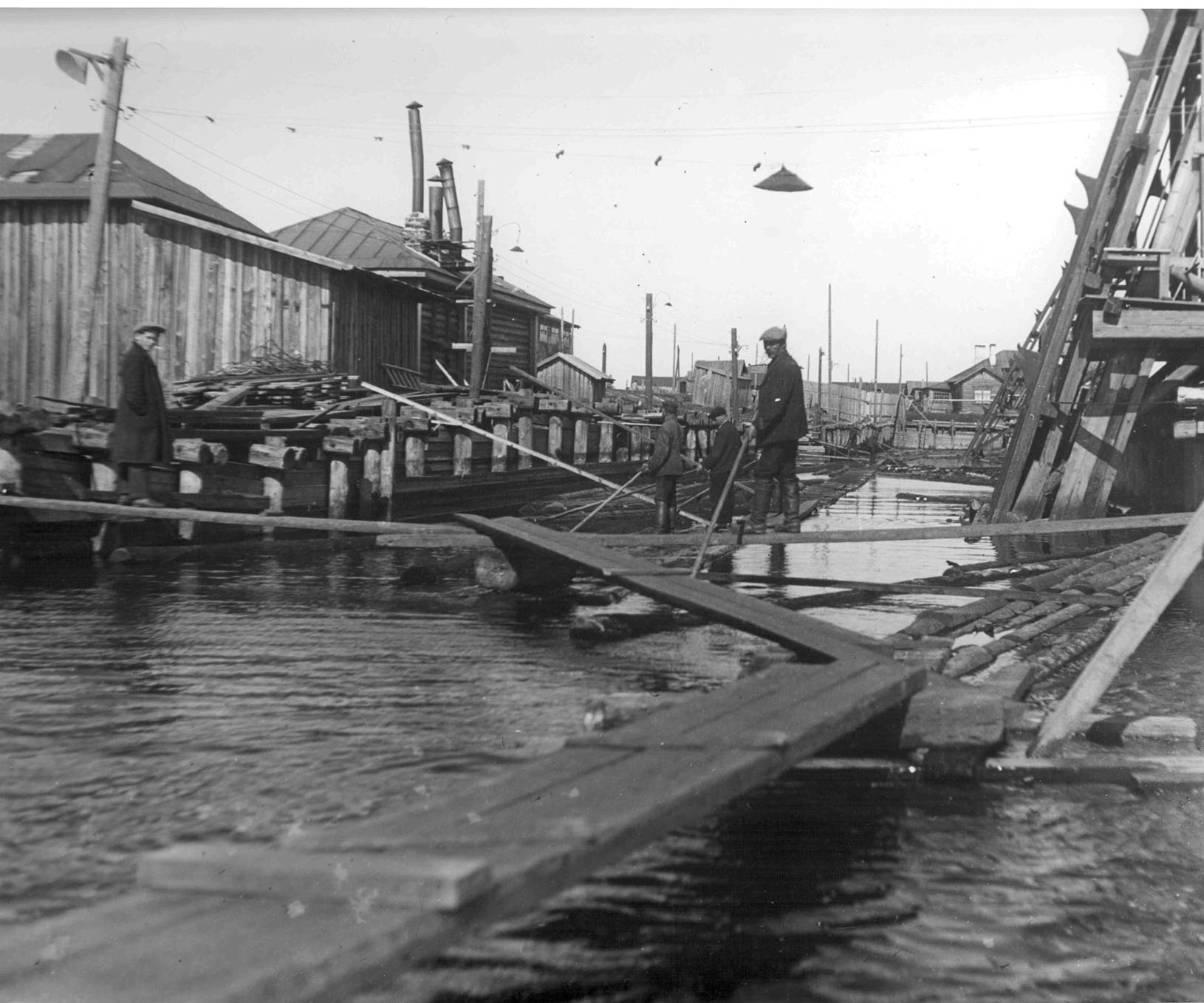 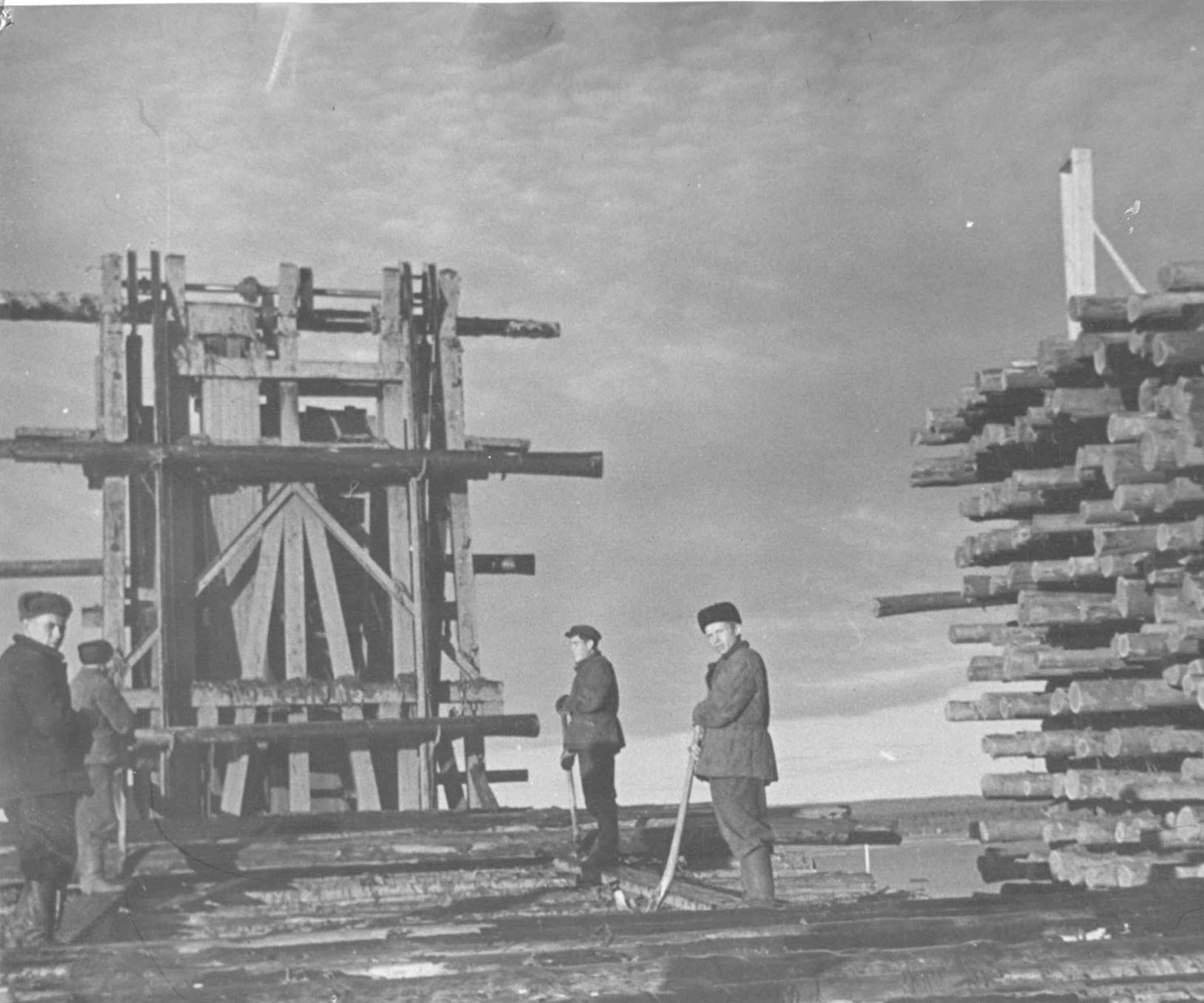 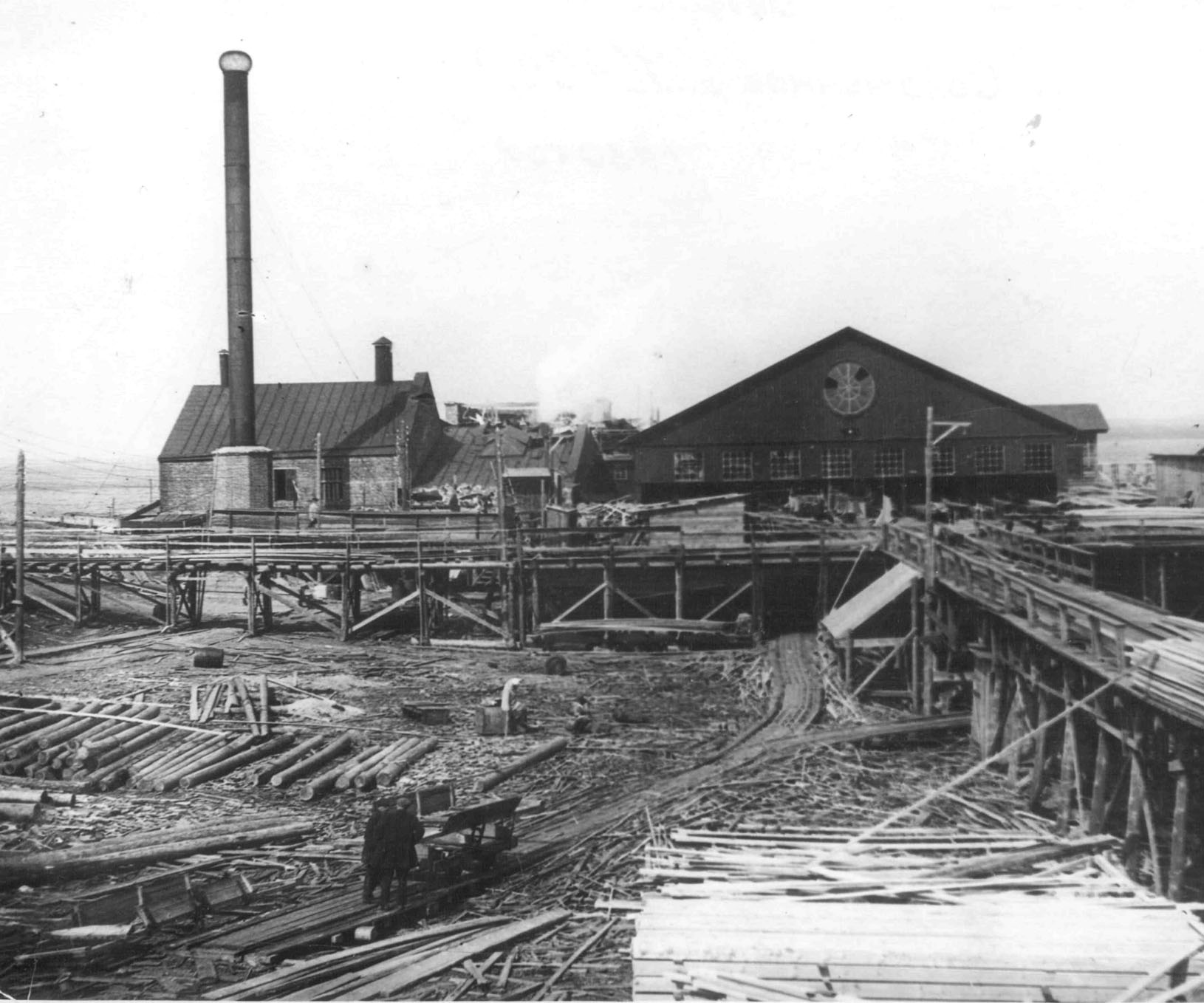 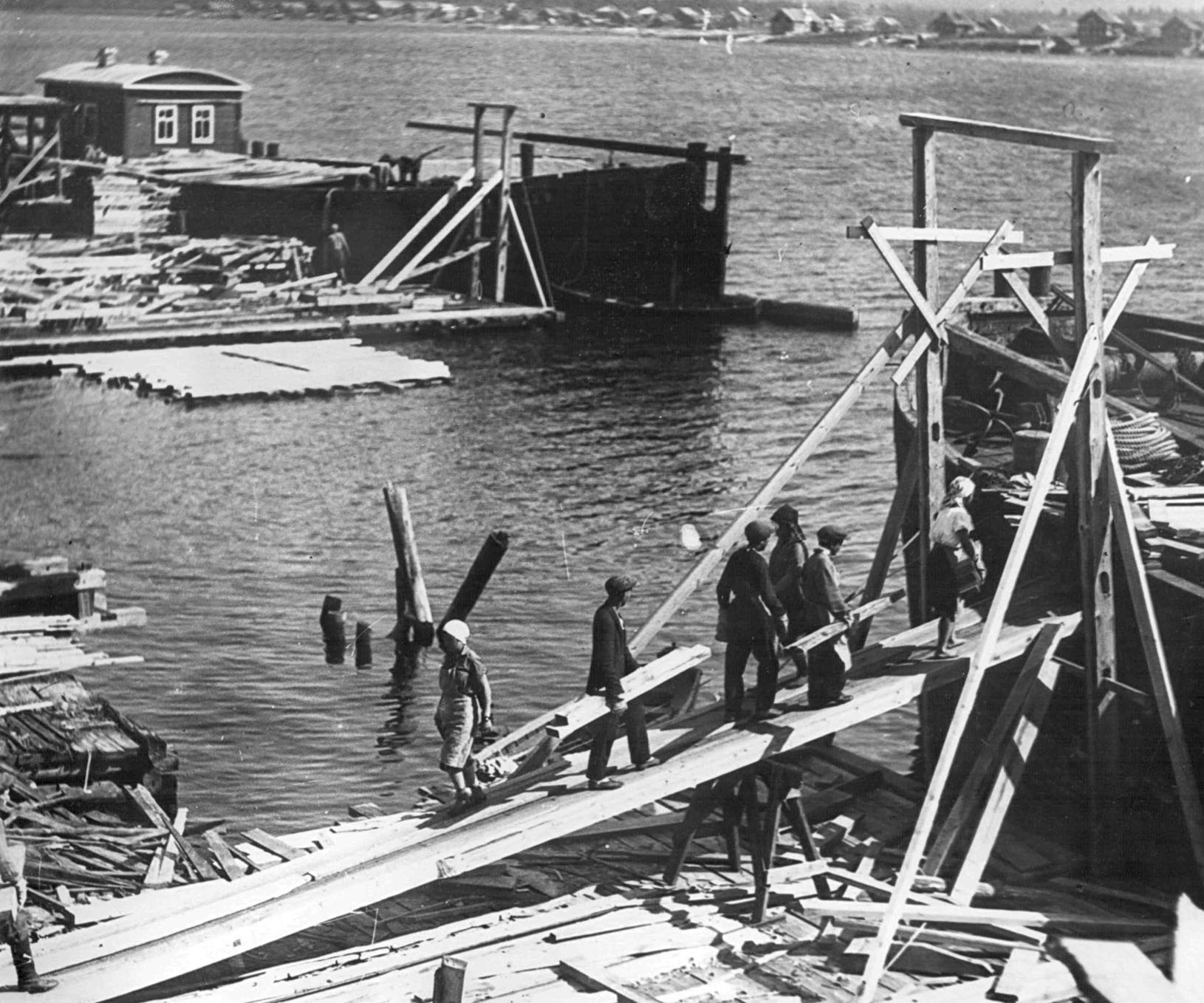 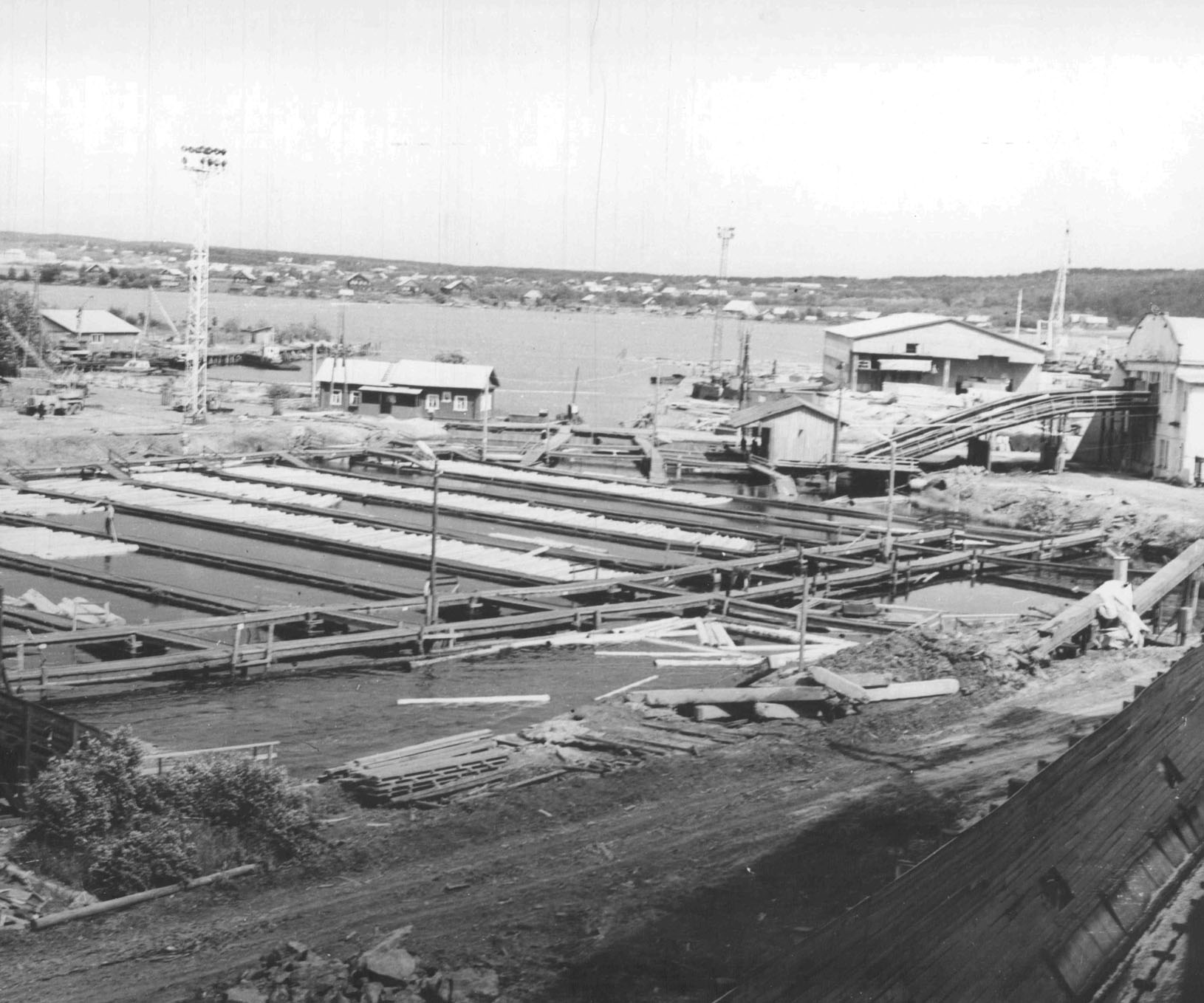 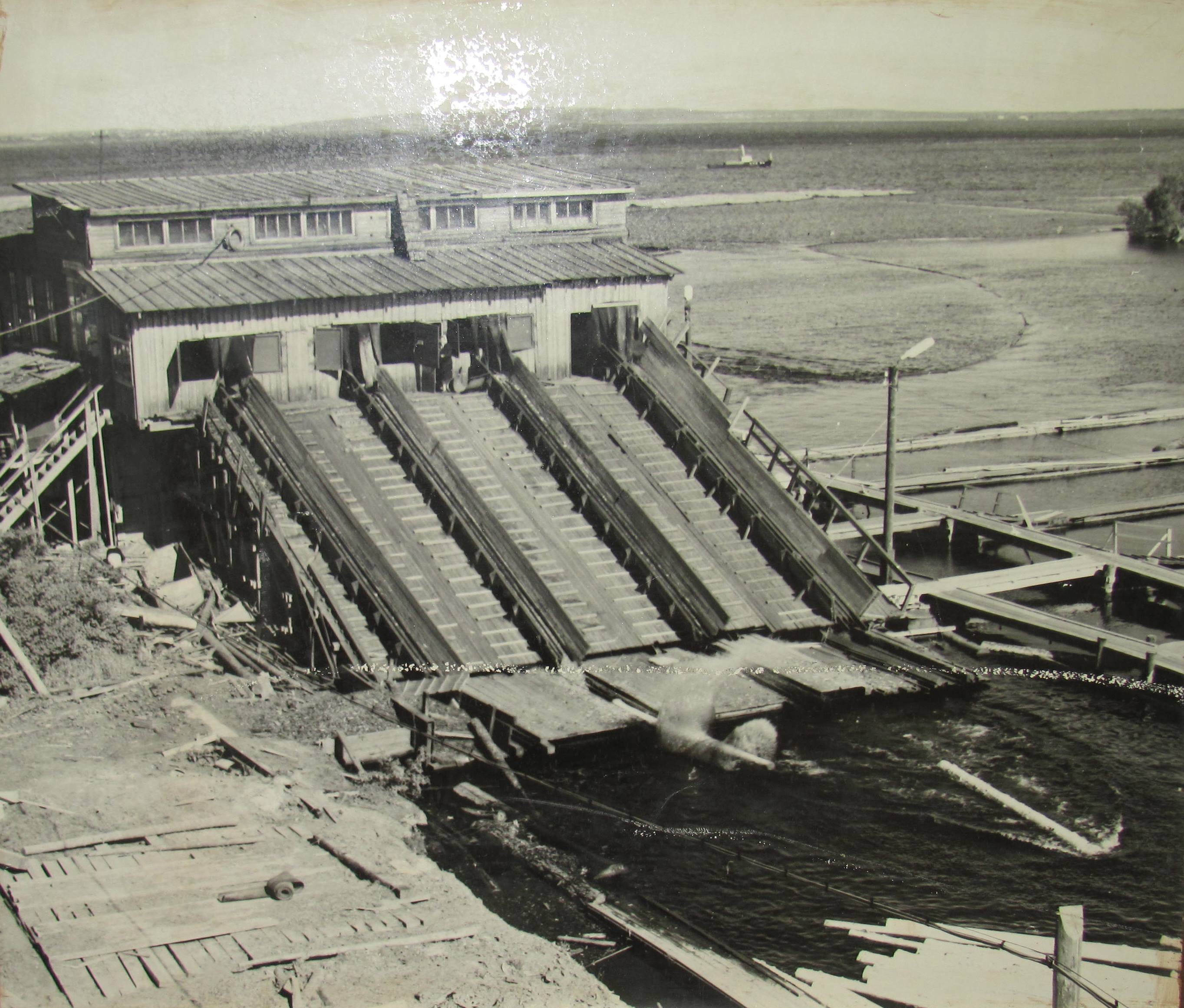 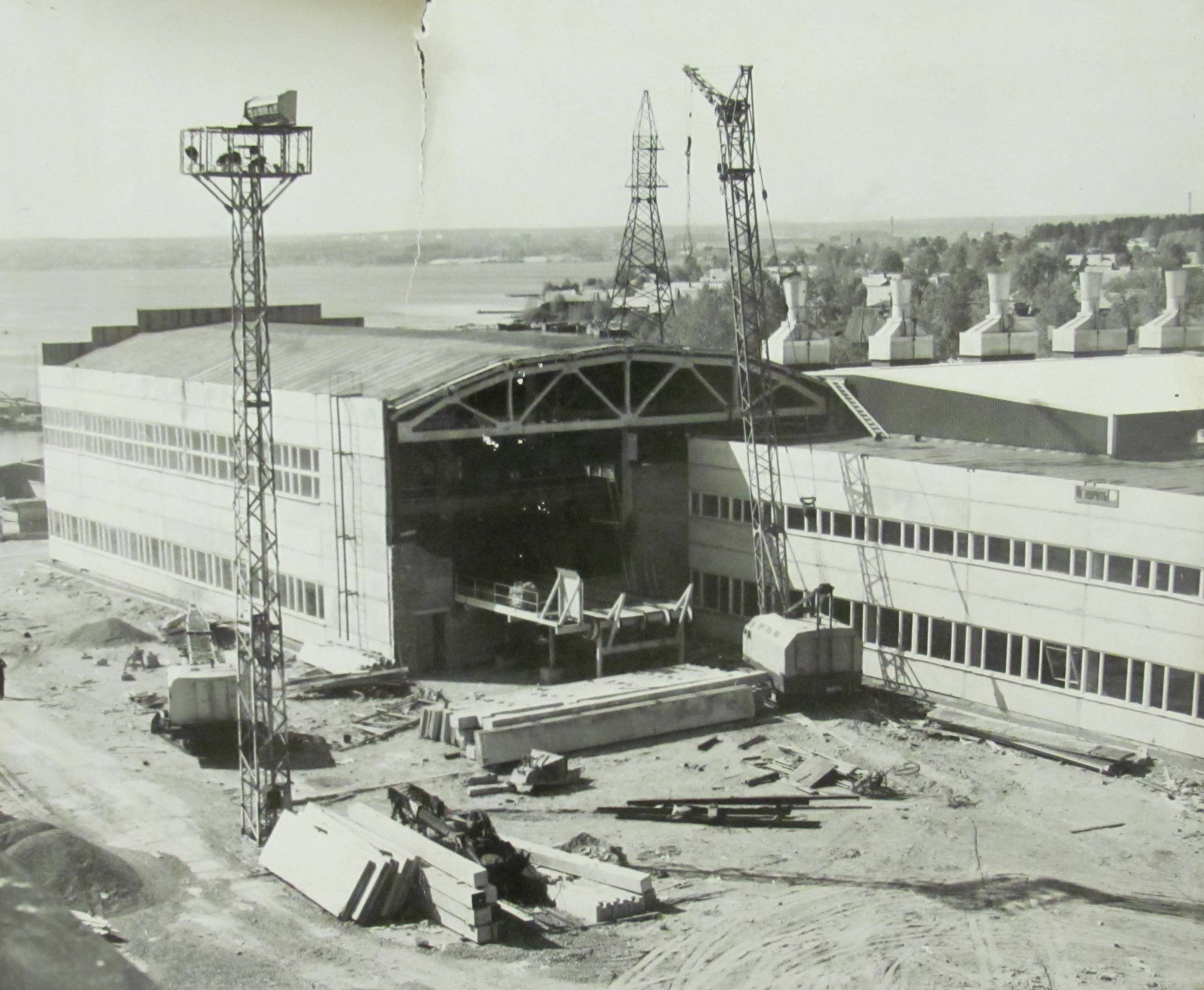 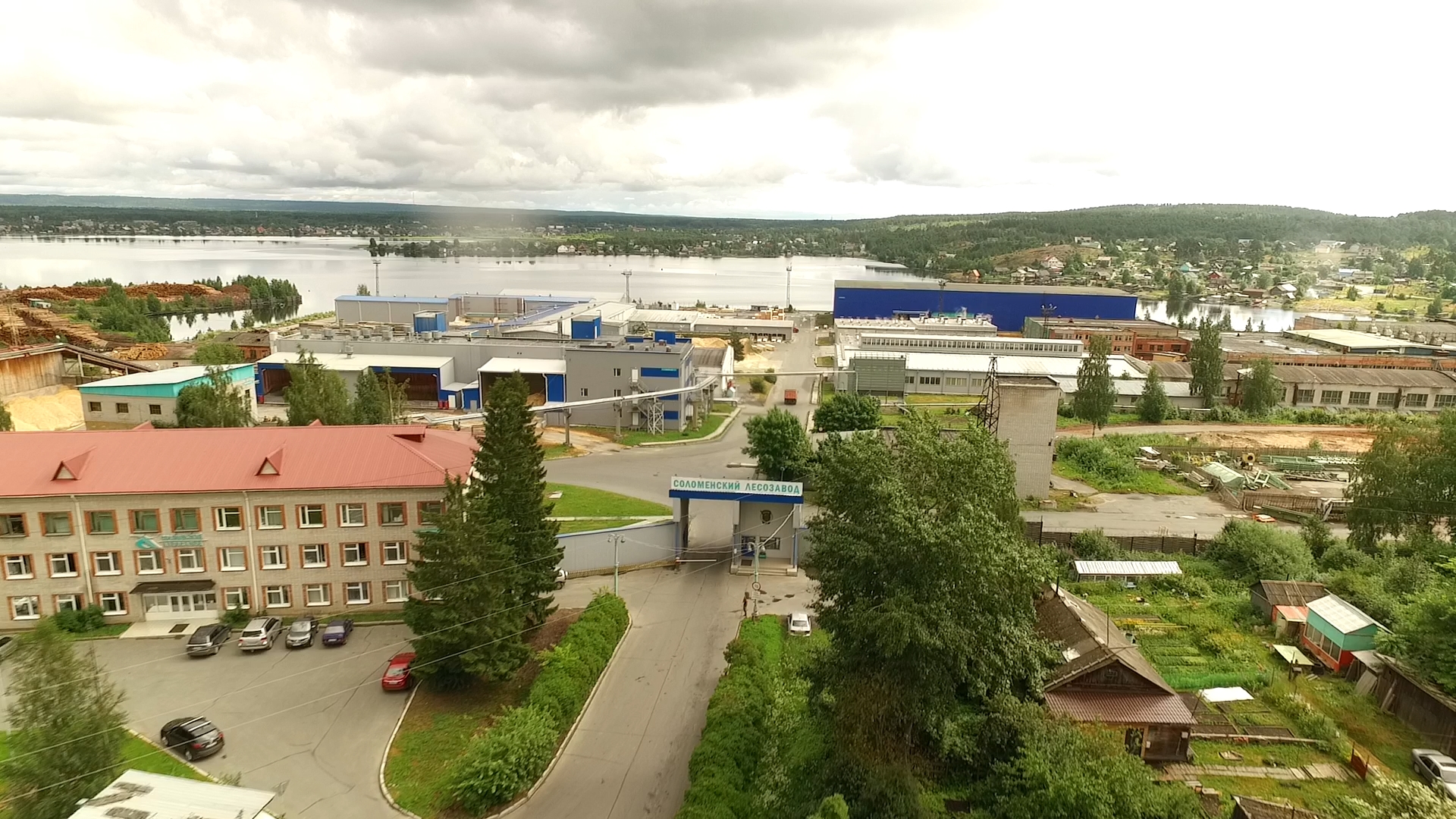